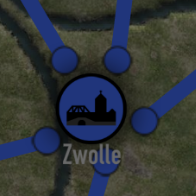 In Assault Battles which are fought at map points, the defenders are required to defend all the Objectives for 30 minutes or capture all the Access Points in order to win. Attackers have to capture all the Objectives to win. If they capture none in 30 minutes, their assault teams are pushed back to the previous Map point. If both teams hold one or more Objectives after time runs out, sudden death begins and the first team to secure all the Objectives is victorious. Assault Battles can either be War or Staged. In War Battles the Assault Teams are controlled by real players and the results contribute to the outcome of the war while in Staged, the ATs are computer controlled and the battles have no relation to the war. Additionally, in Staged teams are complemented by AI players or bots and player do not need to play as the faction they joined for war. They can access Staged battles as an faction.