The war map is where the 'generals' portion of the game takes place. There are 23

capitals and countless cities as well as supply lines in between where battles can take place. One faction must capture 15

capitals in order to win.

The setting currently includes most of Europe excluding

Also, even though parts of Africa and various other regions are visible, they're empty and inaccessible.

Wars are won by strategic coordination of the officers and generals who control the assault teams and the formation and victory in battles which are fought by the heroes. Generals are nothing without their soldiers and vice versa.

Top Left - Here you can find a certain battlefield by typing in the name of the city and you can also zoom in or out.

Red Box - Faction Stockpile (Shows the number of each vehicle and soldier type your faction currently has and the production speed).

White Box - Amount of time the war has been active (not real time, it has been sped up).

Yellow Box - Equipped Assault Teams. This is managed in the Heroes area as shown here (5th tab on the black box).

Top Centre - War Number (in this case 995) and Capitals Held (Indicated by the stars, hovering over the box with your mouse brings up a more detailed view. Hovering over a start will show you the capital's name.)

Blue Box - Deploy All Assault Teams (ATs can be individually deployed in the yellow box.)

Start of the War[edit | edit source]

At the start of the war each faction starts with 3 capitals :

ATs are deployed at Capital cities and they make their way along supply lines to the frontline.

Moving ATs towards an enemy controlled and occupied area results in a war battle.

Winning the skirmish battle along a supply line near a city will let you attack the city where you can take it over if victorious. 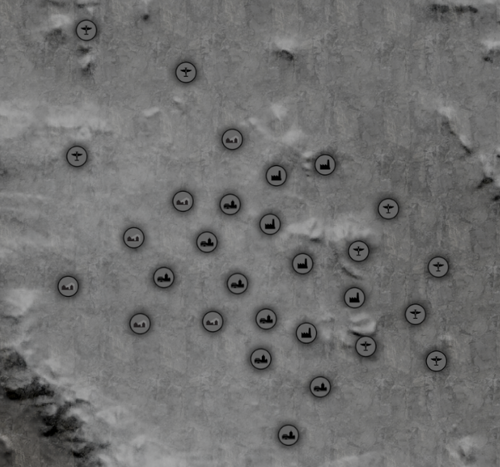 At the very bottom right of the war map, there are numerous towns, factories and airfields that you fight in during staged. They do not have any paths leading to them or connecting them. You can find them by searching for "Arlo Village".

In the far bottom right (SE) corner of the map, on the eastern bank of the suez canal you can find the cities used in staged battles. They are in no way accessible with ATs or interactive.