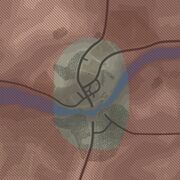 Colmar Hamlet is a map added in the 1.10 build. This is one of the starting map for Tier 0 players (rank 0-3), but can also be accessed by Tier 2 players. It is designed to help you learn the basics without tanks and planes, via the use of a gamemode called Encounter - in which said ATs are unavailable (along with recon and paratroopers).

The entire map is based in a small village, surrounded by a river and crop fields, however most of the fighting will occur inside the hamlet, a collection of buildings that can only be accessed in part. The village is crossed by two roads, going from North to South and East to West, although some of the entries of the village are blocked for vehicles.

The two main Spawnpoints are at North and South of the point. Attackers from the South will have to cross the river, either via shallow waters or the only bridge in the map.

The Village (O1) is composed of an assortment of houses, some of those inaccessible. At the North-East, a big building like the Police Station objective in the Town map can be found. Most of the fighting will often take place in the middle of the town, between cabbage patches and walls that will provide some cover.

An Encounter is created on a Skirmish line when no armour, recon or paratrooper Assault Teams are present. If those are present, then the map will simply be replaced with a normal Skirmish.