Want to chat with regular editors of the wiki and discuss changes or up-coming build information?

Add this page to your watchlist and stay on top of things!
Please start new messages at the bottom of the page or click this link to add a new section.

The page for civilian bicycle is protected. Does it need to be? A lot of bike jokes or something?

Lol yea we had a guy who kept changing the number of passenger to 2 and higher, Other would sometimes change it but in "passensger" counts on the wiki we do not include the "driver" (Mostly for tank pages/alt gunners etc) anyway locked it ages ago. --

Finally new para images have been trimmed up. Have not done soviet lend lease one as image had the engine running so blades would have been blurry/miss-trimmed. Angles are not 100% perfect but close enough/ better than what we had. --

Added a new featured image box on the main page that acts like a slideshow- just chucked some screens we had lying around in there for now will likely grab some nice custom screens from the forums and add them in later. --

I think gameplay section on vehicle pages should really be merged into tips and if really needs to be kept it can live in GUIDES.

Description, -------- e.g. Retos description that can be found in the vehicle store.

Upgrades, -------- e.g. Crate options if there are any if not keep the category and simply place N/A.

Gallery, -------- e.g. A place for in game images or community made images drawing attention to the strengths and weaknesses of said vehicles.

keeps them neat and tidy.

It's fine for the infobox, but galleries are a nice feature for other images (so long as they look professional/standerdised) such as the staged screenshots made on test server and images that show more detailed info like armour thickness eg combine the 2 pics below which we have a few of now (colourised ones similar to war thunder display system). They are also very much commonplace in other wikis. -- 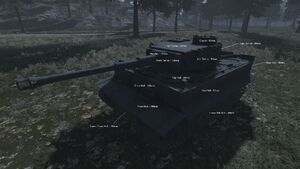 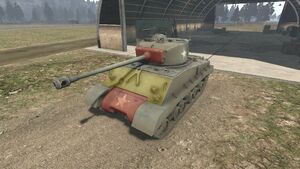 Yea BlaineUK has been messing round with them a lot. I would be helping him getting images info etc unfortunately my gaming PC is dead (moving overseas soon so won't bother replacing til I get there) so I am working off my crappy laptop. I don't see you post much on the forums. --

I used to post a few suggestions of the forums but it really is a cesspool of arguments and egos and my small number of ideas and suggestions got buried beneath OP and war ego discussions not to mention the avatar and over sized signature vandalism. I feel for you not having a gaming PC.

That's the forum for you, every now and then I post wiki stuff there (like ideas on how to improve or what people think/just asking for opinions etc) and it too gets drowned out in the flame war. Although even on the reddit I posted a topic and had the same response.. --

Please do not use weapon abbreviations, unless previously related to the full name earlier in the same article. For example, instead of writing StG44, I would write Sturmgewehr 44, unless I had previously written in the same article "The Sturmgewehr 44, also known as the StG44..." or something to that effect. It would be nice if this could be added to the style guide. In the mean time, I will be going through pages and changing the abbreviations to the full names where I see fit. I have lots of tiny edits ahead of me... -Nemotoad 10:56, 2 November 2015 (UTC)

its been how many months now since the wiki was updated? alot of the info here is misleading currently due to current modified features.

I've been passed along a request by the devs to update the skin of the wiki. I've already started some work on this behind the scenes, but I don't have an ETA yet because I'm still expecting some graphics. I think it'll probably happen sooner rather than later, though. The new look will be closer to the appearance of the official site. OOeyes (talk) 02:44, 12 September 2016 (UTC)

guys, i have uninstalled and reinstalled heroes and generals on steam few times but this error keep coming in. Its had been like this for 3 days already. I check the server status in twitter and it say that it has re-open. Can someone help me to solve this issue? Things that i had done is "verify integrity game cache", steam-setting-download-clear download cache" and "uninstalled and reinstall it again" all not working

Hey guys. So many cool skins for russian weapons. But most US skins aren't as they look when you buy them. And i think there should be skins and skin combinations (a US star and you put it on birch skin) TT33 has one ok skin

Tell me your ideas!

The auto purchase price is according to Physical, Tactical, Combat, Vehicle, Aviation, Armor and Weapons

Questionable information on the T-38 Page[]

On the T-38 page, it says in the Tips section that the T-38 is capable of taking on the Panzer I, Panzer II, M2A2 head on and the 38(t) and M24 Chaffee from the sides or rear with the right ammo. Just below that, it says that the T-38 must run from a Stuart or Panzer II Ausf. C (leads to the same page as the Panzer II, so I assume its the same tank that the T-38 is supposed to be able to take on with the right ammo). I have only ever played infantryman, so I don't know a thing about tanks. However, I'm pretty sure there's contradictory advice being given on the T-38 page (at least regarding what to do against a Panzer II). I also find it hard to believe that the T-38 with good ammo can fight a Panzer II, Panzer 38, and a Chaffee but never a stuart. Even though the chaffee appears to have more mm of armor from a cursory check of its wikia page, it has a way bigger gun and I have always gotten the feeling that it's better than the stuart. The panzers also seem to outclass the T-38. Anyway, could someone experienced in tanking please look over the T-38 page and update it? I'm sorry if this was the wrong place to post about this or if I'm misinformed about the T-38's capabilities.

P.S. Has anyone ever wondered what a battle between a T-38 and a T-20 Komsomolets would look like? They both use the same exact machine gun as their main armament, have paper armor, and have tracks. It's actually pretty funny how a soviet jeep resource has such similar specs to one of their light tanks.

Not the place you should be asking, though the only advice I can give you is to keep restarting the client until it works.
MarineScienceDude (talk) 18:04, 12 February 2021 (UTC)

We'll have to notify the Administrators on the Heroes_and_Generals_Wiki:Admin_noticeboard
Oh, and please remember to sign your comments with ~~~~
MarineScienceDude (talk) 08:07, 28 April 2021 (UTC)

hello. i was installing this game from the exe from the official website and i got blue screen why?