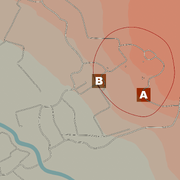 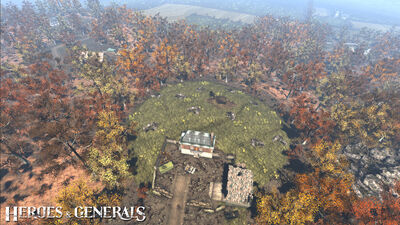 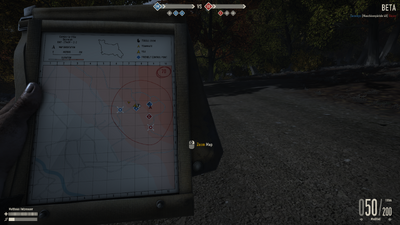 Hill 60, formerly known as Hill Skirmish, has the basic linear layout where each side spawns near one of the points with a central point between them. The center of the map (Point B) is located on a hill top with no foliage around it. This map generally has a lot more foliage and trees for infantry to hide in. At the spawn, players can pick up a Panzerfaust 60. There are also a few bicycles near the spawn for players to use as means for transport.

Point O1 provides a decent amount of cover for infantry. As infantry units are coming up from the closer spawn they can flank from many directions with lots of foliage. Tanks will have a hard time camping in this location for long due to all the cover. There are bicycles at point O1 for infantry to use to move around the map easier.
Highlights

Point O2 is located on top of a hill with no foliage close by. The edges of the point are surrounded by trees and bushes where Recon typically hide in. This makes camping or sitting still near or on the point very hazardous for infantry units. Tanks often camp near or around Point B, the open area provides easy awareness of infantry units and vehicles moving around. Located closer to the O1 side of O2, there is a pile of rocks that snipers often camp point B from as it provides a very good view of the battlefield and height advantage.
Highlights

Point O3 is a rather difficult point to guard. The enemy team can come from the height advantage of point O2 and from downhill through thick foliage coverage. The sloping hill provides good spots for Recon to go prone and guard the point. Point O3 is rather difficult for tanks to get into and get out of as they have to traverse uphill towards O2. This often makes them easy 'prey' for anti-tank weapons at this point. There are a few bicycles at this point for infantry to use to get around the map.

The early stage of the game plays a very important part in the outcome of the skirmish. In order to get the best position for the first firefights one should rush with 1-2 (motorized) soldiers up towards O2.

Taking O2: There are sandbags on both ends of O2 which are perfect for cover and concealment while capping since most enemies are coming straight from their spawn. If your team is motorized and the enemies aren't you can take the objective alone and set up in a different position before the enemy team even reaches you. The team spawning on O3 has a slight advantage because the hill they have to climb is not that steep. If O2 is getting capped by the enemy team the best strategy is to go up the open hill/field in the middle towards O2 because the enemies are looking towards the opposing forest. Approaching the crouched or prone enemy from the side will make them vulnerable to fire and an easy capture on B. Watch out for Recon on the rocks when the enemy team has the O1 spawn.

Afterwards: Do not leave O2 completely unattended after it is capped. Have 1-2 friendlies stick around the area and cover the spawn route the enemies will most likely take. If the enemy starts capturing B check the map with "M" and see if you have any teammates nearby. If not, head there yourself. Keep an elevated position and check the usual capping spots. It is very easy to get spawn trapped at A spawn when the enemy captures B quickly and flanks from the hill.