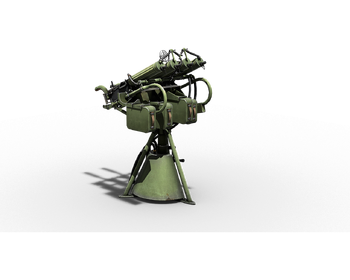 The Maxim M4 Quad is a Soviet-designed anti-aircraft gun used by the Red Army in the war to shoot down enemy aircraft. It is mounted with 4x Russian Empire World War One-designed Maxim M1910 water-cooled heavy machine guns. The Maxim M1910 machine gun is a modified version of the original American Maxim 1895 modified to chamber the 7.62x54R cartridges, The rate of fire is from 500 up to 600 rounds/minutes (same rate as M1919A4). The smooth water jacket is modified to a corrugated water jacket.

The Maxim M4 Quad is generally found at main objectives and access points if they are held by the Soviets. When American forces control the area an M55 Quad replaces it, and a Flakvierling 38 is present if the area is held by the Germans. An anti-aircraft gun will spawn with full ammo and full health after a short period of time after it is destroyed by any source of damage, usually in a pillbox position, or on a elevated position.The anti-aircraft gun will automatically refill itself when it runs out of ammunition.