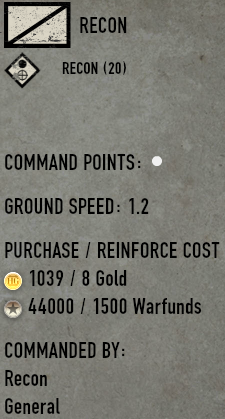 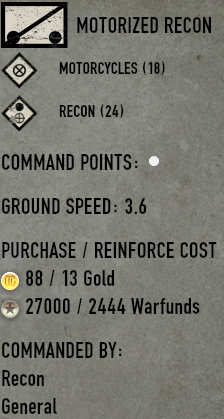 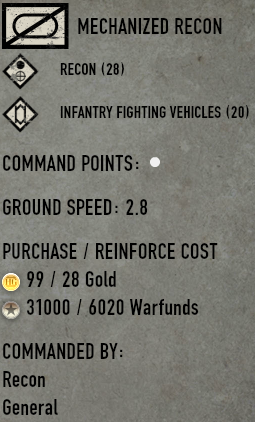 Recon act as marksman and/or snipers in the game, are the experts in long distance shots, their knowledge of the terrain and their ability to camouflage themselves help her approach the enemy without being noticed, facilitating the location of enemy forces. These highly trained soldiers belong to specialized Reconnaissance Assault Teams. To unlock one of these you need to reach level 9 in-game. The main task of recon is to snipe enemies, attack from behind, make traps and even sometimes cap points. They're also more likely meant to defend, they won't do good in assault mission mainly because the capacity of their AT.

Recons unlock the scoped rifles but have to buy them. If you purchase a recon with gold you get the weapon with your recon immidiatly. Recons should always move because lurking in the same area exposes you to the enemy. Don't hide somewhere where you have no vision on your enemy. The effectiveness of recon is to scout, mark targets (tanks and such) so your planes and tanks can deal with them. Furthermore a good recon advances with his team. if you are defending make sure you have an eye on the enemies running towards the capture point and take them out so your teammates have an easier time defending it. If you are advancing make sure enemy cant get in to defend their point. When the point is secured you can move on. If you have the pistol make sure to use it. If it's full modded its a 2 hit kill weapon so take it out in close quarter combat if you have to. If you use anti personal mines place them in areas where the enemy will most likely walk or on points where ppl can backdoor you. Mines help you pretty much in that case. But remember: place the mines that way so your teammates have a chance to leave the area. If you mine every entrace w/o a possibility to bypass them, your allies will shoot them.

For recon there are only 4 important ribbons. if you play it right you need actually only 1 badge. The pointer quick fire one. It increases your accuracy from the hip. You can unlock this badge with leveling your Handgun ribbon. (with pistols). If you have a veteran membership you unlock a second badge. I recommend you to use as second one the camouflage one. It decreases your spotting mark. You unlock it with the recon ribbon. But you actually don't need it that much since you are constantly moving with your team. Another option is quickdraw. Your unlock it with combat movement ribbon and this badge increases the time it takes to aim. Furthermore when you make your recon badge lvl 12 you also unlock the no killcam badge. So if you kill someone your position wont be revealed.