A skirmish battle is started whenever Assault Teams of opposite factions meet outside of a city part way along a supply line as shown in figure 1.

The Skirmish battle is fought between the Assault Teams until one faction holds a majority of the objectives long enough indicated by the bar filling at the top of the screen.

fig.1. Formation of a Skirmish[] 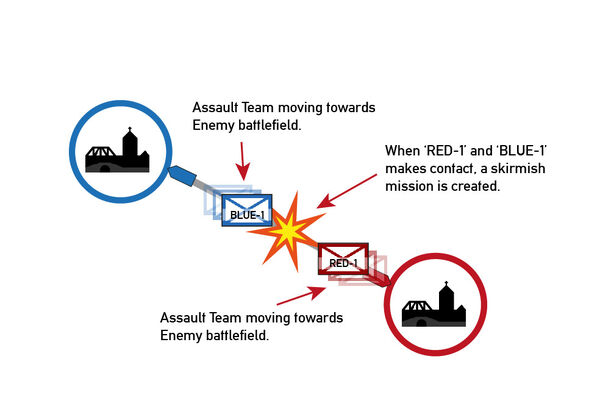 Objectives in a Skirmish[]

In a Skirmish match, there are three capture points. One point is located closer to each factions spawn point and a third is located equidistant from each spawn point - this is usually the main contested point. A team wins by securing the majority of the points for a certain amount of time, whilst stopping your enemy from capturing them. Controlling all points will allow a team to fill the bar and therefore win quicker than only controlling two. The difference between a skirmish and an Assault battle is that there are no points other than the mission objectives and any point can be captured by both teams at all times without controlling previous points.

Currently there are three Skirmish Maps in the game: