A "squad" in Heroes & Generals is used to teamplay with a group of people. It is also the easiest way to play with friends in the same battle.

A squad is a sub-group of characters playing together, inside a faction. It is the first step of teamplay, and thus the first step to victory. The squad is composed of a Squad Leader, who can issue orders, and of Squad members. Working together will give bonus XP to all members of the squad.

In the main menu (except for "Generals" tab), you can invite friends to your squad by clicking the "Squad button" at the lower part of the screen to access the squad menu. Else, the game will automatically try to find a squad buddy (rank will determine leader). After a game, the auto-generated squad will be automatically disbanded and you will no longer be grouped up with squad buddies that the game has automatically assigned in the previous match. Squads you created by adding friends, however, will stay the same after the game ends unless somebody decides to leave the squad, you kick somebody from the squad or you disband the squad.

If you would like to dismiss a squad member or leave the squad, you just need to go to the scoreboard (default 'Tab'), then either find yourself on the scoreboard then press left mouse button and select 'Leave Squad', or select the member of squad you like to dismiss, press left mouse button to dismiss the member from your squad. During the battle, you won't be able to get back into a squad after leaving a squad. For squad leader, the squad spot would be locked for the rest of the match after one of the member being dismissed. So think twice before you leave/dismiss someone from the squad.

Different classes have different numbers of slots for members in the squad:

The Squad Leader is a temporary hierarchical rank lasting during a battle. The highest ranked member of each Assault Team is automatically made the Squad Leader for that squad. Note that Rank 6 is also required, else the Squad Leader will be called Squad Leader Cadet, and will not be able to issue commands. A Squad Leader can also choose/change the spawning point of his squad.

One the map, before spawning, a Squad Leader can change his spawning point (Shield icon

). Doing so, all his squad will be affected and spawn at the same spot.

By pressing 'Q', a Squad Leader (minimum rank 6) can issue orders regarding control points or zones: Attack, Defend, etc. While holding 'Q', move your cursor to the desired location and press left mouse button to confirm your order. The order automatically adapts to the objective: pointing a friendly point will issue a "defend" command, while pointing a neutral or enemy one will issue an "attack" one. Note that, by pressing 'Q', you will also see the other orders given by other squads (see picture on the right).

The Squad Leader only commands his OWN assault team, so you cannot give orders to players that are part of other ATs. 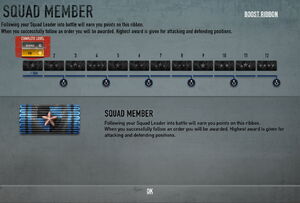 With clicking ‘Q’ and ‘Mouse 1’ the Squad Leader can give the command to, for example, attack a control point. Hovering over the point will show you, if another friendly Squad has set an order on the point already, which gives you the opportunity to coordinate with the whole team.

The Squad leader can now set the order Defend on the point. The Defend order emphasizes tactical play with the whole team. A Defend order is successful, when the next Capture point on the Access Line is neutralized.

A third command can be given by Infantry, Recon and Paratrooper Squad leaders – Rally. After a completed attack, a Squad Leader might want to gather his comrades before advancing further or defending a control point. The Rally command can be given by ‘Q’ and ‘Mouse 1’ click to any place but Control Points. Once every Squad Member reached the Rally point, experience is awarded and the Command is concluded.

Another command, only usable by Tankcrew and Pilot Squad Leaders is Clear Area. This is given in the same way as Rally and experience is gained when enemies are killed in this area